“The Plant Messiah” book by Carlos Magdalena was a massive treat to listen to at work. It will appeal to all plant lovers, gardeners, landscapers and horticulturists. The audio version is eight hours long and it could have been longer.

The background story is fascinating. Magdalena was born in Spain and eventually made his way to the Royal Botanic Gardens, Kew. There he was eventually accepted into Kew’s training program which only accepts something like twenty students a year. It was a dream come true for Magdalena. He was so good, he stayed on to work on endangered plant species. Thus the label “the plant messiah.”

The Kew training period is described in some detail and I felt a bit jealous when I listened to it. When I go to England next, I will visit Kew.

Magdalena is an expert on water lilies and he describes many overseas research trips. This is fun to listen to and reminds me of the old plant explorers who would travel the globe and then send specimens to Kew.

Magdalena’s love of plants is infectious. He’s a professional and it shows. 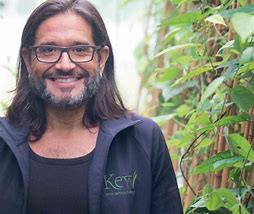 Google image: I don’t own this picture.

Because this book is about plants, Magdalena correctly reminds us that plants are extremely important for humans. I think it’s true that people often fail to appreciate plants. Without them we wouldn’t last long. This is Magdalena’s one serious message in an otherwise fun book.

Just consider that we eat plants, we burn them for fuel, we derive pleasure and medicines from them, and we also build with them things like shelter and boats. Many people also consume them as a hobby; and they’re also used in religious rituals. Many drug lords got rich thanks to plants.

Can you think of other uses?

I thoroughly enjoyed the eight hour audio version of this book from Kobo. I can’t find any faults with it. It inspired me to study more about plants and to appreciate them more. And Magdalena’s enthusiasm is infectious. Five stars. Easily.