Surprising landscape corner with a twist

Strata (multi-family) sites come in all shapes and sizes and my job, all year, is to maintain their landscaping. And I’m rarely wowed or surprised as I work in the landscapes. But it can happen.

As I line trimmed around a corner I literally ran into a nice wave of yellow. What do you think? 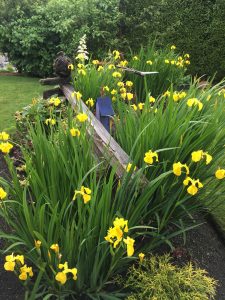 I love warm yellow colours and the Irises deliver lots of warmth. I also immediately noticed the Rodgersia in the background. Aside from its prominent flower spike, it sports tough leaves. I was first introduced to this plant when I worked under municipal gardener Tracy Mallinson. 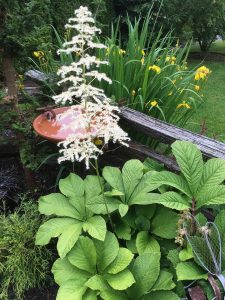 I also noticed nice bed edges and a ball made out of driftwood.

Overall, this whole corner works for me. It was fun working around it and taking pictures of it on company time.

I posted my corner discovery in one Facebook group and many members liked the picture. Except for one friend, Heike Stippler, who is the ultimate green professional and owns her own Heike Designs business based in Whistler. Because she is also involved with the Invasive Species Council of BC she gently pointed out that the Irises above are invasives called Iris pseudocorus or Yellow flag iris. Bummer. I had no idea. I was just taken with the yellows.

Then I remembered that several seasons ago, while working in the Klahanies neighbourhood in Port Moody, British Columbia, I had to remove several Yellow flag Irises because they were close to a stream that empties into the Inlet and is currently populated by beavers. The resident who called in the removal request sounded like the world was ending.

For this section I am openly borrowing from the Invasive Species Council of BC website. As it turns out, I’m not the only person wowed by this yellow Iris. It’s a popular, eye-catching plant and allegedly sells well at nurseries and garden centres.

The problem is that this Iris forms dense stands in wet areas and pushes out native plants. When cattails, sedges and rushes are pushed out, birds lose nesting areas. The yellow flag iris can invade irrigation canals, ditches, shallow ponds and stream and lake shorelines.

Since the iris is invasive it makes sense that it reproduces quickly through seed dispersal and horizontal root systems. 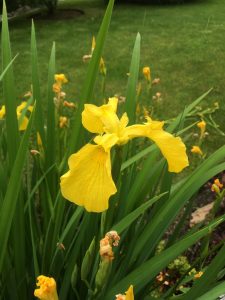 Be careful when you fall in love with a yellow Iris. One suggested alternative plant is Iris ‘Butter and sugar’. Since this spot is buried deep inside a huge strata complex and far from water it’s unlikely to invade anything but winds are unpredictable. I would consider replacement with some other plant just to be on the safe side.

By Vas Sladek | machines | No Comments

I love testing new machines in the field and forming my own opinions of them instead of relying on online reviews or sales pitches. I did this recently when I got my dirty landscaper hands on a new set of Stihl pruning shears. And I had a blast testing them.

I will give you the key idea of this blog post right now: the T stands for precision sculpting and trimming which should make all landscape professionals smile. Most landscapers have used the R models which are for “rough” pruning, say, for laurels like Prunus laurocerasus ‘Otto Luyken‘.

But what if you have to prune something like boxwood (Buxus sempervirens) which is much finer? You use the HS 82T model because it has much higher blade RPMs than the R models.

That’s the key idea of this blog post. So if you’re busy stop reading and go prune something. Or stay and see my work and read about the HS 82T specifications which are available online.

I tested the new power shears on boxwood at a large strata site and I was very happy with the results. It helps when the shears are new and sharp. Always make sure your blades are sharp and use ear and eye protection. I guided the blades over the  hedge and let the high blade RPMs handle the rest.

The unit didn’t feel heavy, it started well and I didn’t really notice any vibrations. I gave the power shears 5/5 in my review on Stihl’s website. 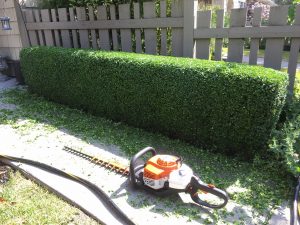 The shears performed really well on this boxwood.

The HS 82T power shears are gas-powered but Stihl promises 20% better fuel-efficiency over other models which should add to your bottom line. The other important feature on newer machines is the low-vibration technology which I absolutely love. It really does reduce operator fatigue. You may also consider using anti-vibration gloves. I used to buy them and quickly lose them.

I didn’t really have any issues with unit weight and I pruned  for over six hours with half an hour lunch break in between.

The Stihl HS 82T power shears will be the go-to model for “precision sculpting and trimming” as the Stihl USA sites mentions. I tested this unit on boxwoods and laurels and I was happy with the results. I suggest you test one unit soon. (Disclaimer: I am not in any way associated with Stihl.)