It’s been hot for weeks now in the Lower Mainland of British Columbia but this blog will take you back to last winter. The last winter we went through was the harshest in the last 30+ years. Consequently, many plants didn’t survive, namely Ceanothus and Choisya.

So, many strata sites required heavy plant editing. We had to carry out the dead to make room for new plants; budgets allowing, of course. And budgets are tight. Many strata councils have many projects on the go and replacing dead plants probably wasn’t in the budget. One strata owner told me that his own building spent $21,000 just on snow removal last year. It’s a good idea for strata councils to budget for snow removal because global warming is bringing lots of changes.

Walking through one particular site we had to toss many Ceanothus thyrsiflorus (California lilac). They are already marginal in the Vancouver area and one especially crazy winter killed them.

Choisya ternata also got hammered. Since residents were alarmed we had to toss many of these brown hedges. And quickly. 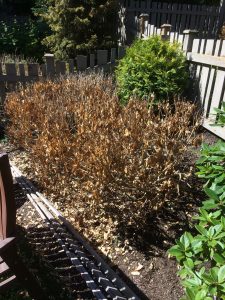 Then we reached many Escallonias beat up by snow and low temperatures. So what do you with this mess? Complete removal is one obvious choice but it would leave a huge hole. If you take a good look you will see growth at ground level. With life at ground level this calls for renovation pruning.

Step 1
First we take out power shears and we remove as much dead as we can. It’s harsh on the blades but it saves time on hand pruning later. 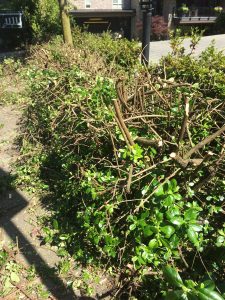 Step 2
We hand snip all remaining dead stems above the ground level green growth. See how the “new” hedge emerges. 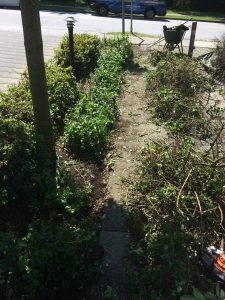 Step 3
Last we do a nice clean-up and blow the area. 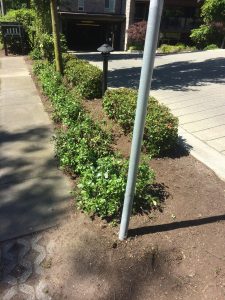 Now let’s take a look at the finished renovated Escallonias. We saved the hedge from complete obliteration, thereby saving the strata council money. Passersby won’t even notice that the plants are down by half. I expect them to grow again and flower as if nothing happened. Hopefully, this coming winter will be gentle with them.

I have also done renovation pruning on rhododendrons.