Fall is perfect for landscape projects

Fall is a perfect time for landscape projects like soil and river rock installs. Take today for example. My whole day just flew by and it was nice and sunny. I remember these days when snow starts falling in winter. Let’s take a look at my day.

This was actually round two for river rock installs at this particular strata complex. Round one involved removing a weak lawn. It was basically a dog patch and the smell in summer was overwhelming. So I removed it and installed river rock.

Round two involved removing Vinca major (periwinkle), which is now considered invasive, and replacing it with 2″-6″ river rock. I like these permanent solutions. I wouldn’t be surprised if next year there will be round three.

Once the periwinkle was removed I dug deeper and cut a few selected roots off the two poplars. Since the soil was fine I disposed of it on site in the back wild zone.

Since efficiency is important, I moved my truck as close as I could to the bed and went at it. The entire load was 1.5 yards of 2″-6″ river rock; tax included $78.

There is one important step you have to take before you pack it in. Find a hose and wash off the river rock. Leaving it all sandy would detract from your finished look. I had to find hoses and outlets which was annoying but well worth the effort. Also hose off the curb. 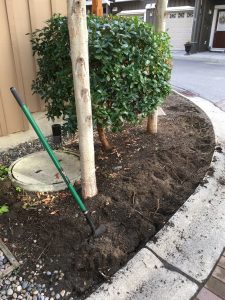 Remove some soil so the river rock is nicely anchored. 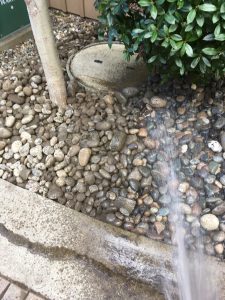 Take the time to hose off the sandy river rock. 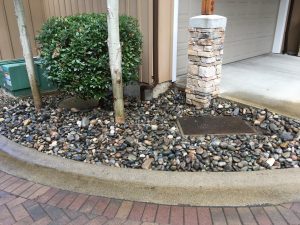 Next I moved to the front entrance. The main strip bed has newly planted trees and shrubs but the soil didn’t look great. So I installed two yards of aged mulch at $80 tax included. It gives this high-profile bed an instant new look. It will settle eventually but I love the fluffy look. It’s money well spent. 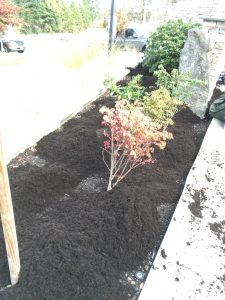 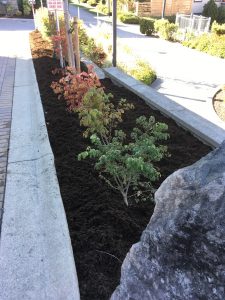 I wasn’t done yet. My end of the day ‘cool down’ involved one unwanted Thuja plicata tree. I hate removing perfectly healthy trees but I had to complete all work listed in the strata quote. That way the boss can send out his invoice.

Some days click perfectly and the hours fly by. This was one of those days. And I hope there are many more.

Fall is a great time for landscape projects like soil and river rock installs. What can you change about your property?