For best results, stick together

Landscape foremen and crew leaders get best results when they keep their crews together as much as possible. That’s the point of this blog post. If you’re time-stressed you can finish reading this later but I hope you’ll stay and read until the end.

First a quick story. When I started landscaping with a certain prominent Lower Mainland landscape maintenance company, I witnessed a heated exchange between the vice-president and my supervisor. The big boss was outraged because we were all working solo in different parts of a large site. What was the problem? Loss of control! It’s impossible for the crew leader to monitor everything when workers are split up. And this was before smartphones became widespread.

I felt offended at the time, thinking that I had enough self-motivation to complete my tasks well. I had some things to learn about crew leadership. And now, finally, eighteen seasons later, I’m blogging about it.

I’m running into two types of crew leaders in my work as landscape supervisor. One likes to delegate and then fade; the other works alongside his crew members. The crews that stick together consistently out-perform the crews that split up.

Now, I know that sticking together isn’t always possible or practical. But tasks like bedwork should be performed in groups. Even mowers and line trimmers can attack the same lawn sections.

So why split? Because working together hurts. There is a price to pay in heavy sweat when you stick with your crew. Delegating and fading to another part of your site is one way to have an easy day. I know of a foreman who delegates to his crew and then invents all sorts of reasons to be away from the main action. But eventually it shows; in site condition and crew abilities.

And let’s not pretend, for even a minute, that the crews don’t see through this tactic.

New workers require training and monitoring and this is best accomplished when you see them often. Delegating and disappearing won’t work. You must be there to lead, to correct mistakes and to teach. This investment will pay off when your sites start looking great.

Your workers will also appreciate your feedback. I know that many new workers have good days when they get trained on new machines or tasks.

The picture below is from my lunch time walk. Full marks to these two; they accomplish more together. And they also look out for one another in a busy mall parking lot. 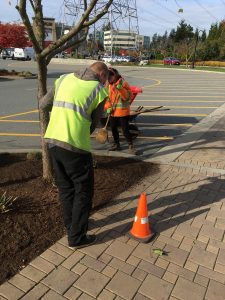 I feel like I became a landscape professional when I switched my focus from my physical state (sweat and discomfort) to the larger issue of site condition. Did we deliver great service to our clients? Did we accomplish the tasks we set out for the day?

Leading workers outside in physically demanding labour isn’t easy. It would be easier to slip out for a smoke and e-mail check. But what’s the goal, exactly? World-class work. And for that you must stick together with your crews as much as possible.