June is a busy month for the European chafer beetles. I was thinking about it this past weekend as I finessed beds for a client. Instead of grubs, I was uncovering adult beetles. Some were spent and some just played dead, then made a run for it. 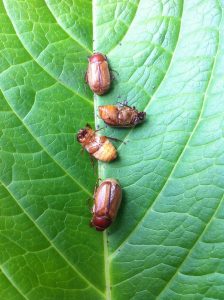 European chafer beetles on a Hydrangea leaf. Only the top beetle is dead, the other three played dead and then made a run for it!

The beetles mature and emerge out of the ground; most likely out of your damaged lawn. Then they fly into nearby  trees to mate and back down to lay eggs. If you’re lucky, they invade your neighbour’s lawn. If you plan to defend your lawn with nematodes, pay attention to the timing.

In late June the beetles lay eggs and by mid-July nematodes should be available. They must be applied to your well-watered lawn, preferably on a rainy day. The recommended nematode species is the “seeker” Nemasys G. Nematodes work but they are not selective. They hunt down beneficial grubs as well. The other problem is that you might have to re-apply the nematodes again next year. Cut your lawn higher and baby it with proper watering and fertilizing.

But what if you don’t feel like applying nematodes to your lawn? One alternative I have seen is breathable fabric used in agriculture. It makes it difficult for the beetles to stick their bottoms into your lawn and lay eggs. Pin the fabric to your lawn at this critical June stage, store it and re-use it next year. In the example below the fabric cost was around $250. 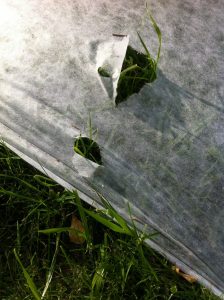 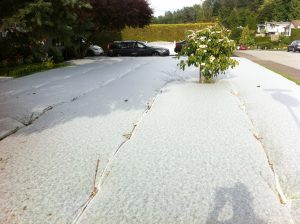 Another alternative is using a different seed mix that will make your grass less appetizing. One test I am involved with involves “Chafer-resistant” seed mix with tall fescue grasses and 2% micro-clover. Warning: the micro-clover will produce white flowers and attract insects to your lawn. At $110+ for a big bag, it will also cost you. 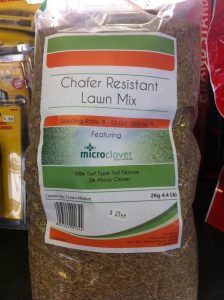 We are testing this seed mix on one site 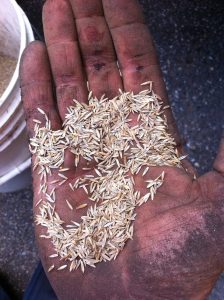 The European chafer beetle battles aren’t going away anytime soon but we can fight back with alternatives.