It pays to join green Facebook groups because once in a while you run into interesting landscaping cases. Like the case of an oak tree versus artificial turf.

While I am not a fan of plastic grass I will show in a future blog that there are some legitimate cases where artificial turf makes sense. More on that later. For now all we need to know is that the artificial turf install was done well. It was done in Europe in an English-speaking country obsessed with royals. See the picture below.

I understand the landscape installer tried to get a tree removal permit but the local authorities wouldn’t have it. So the oak stayed (yes!) but the artificial turf still went all around it.

a) Trees rely on surficial roots to obtain water and nutrients and this root network often extends far beyond the drip line. The oak in this example was left with a small square at its base, the rest of the area got artificial turf. This will make it extremely difficult for the tree to obtain all of its required resources.

b) Artificial turf usually involves the use of compactor machines and soil compaction around tree bases is deadly. Once the soil gets compacted it’s difficult for the tree roots to obtain resources. Water will just run off instead of penetrating into the soil. Soil compaction is a silent tree killer.

This install didn’t use any stone crush base and it’s not completely clear if the soil was compacted with a machine. Any landscape work around the tree base is detrimental. The bare soil must have been graded before turf install.

c) Artificial turf heats up! I know this because my son plays soccer. If the turf can heat up my son’s modern plastic cleats, imagine what it does to the soil below. Soils under artificial turf die. My poor son suffered during his match because the host soccer club failed to water the turf. Who will help the poor oak? 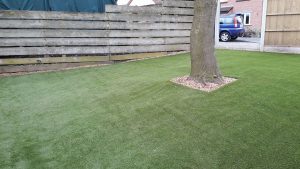 It takes time for trees to decline and die. I don’t like this oak tree’s chances. I’m convinced that landscape trees and artificial turf don’t mix well. You can have one or the other but not both.