Can you really machine gun your rhododendrons?

June on the West Coast means mid-season pruning and on large strata (multi-family) sites there can be a lot of it. So we’re busy power shearing shrubs and making sure the clean-ups are as good as the pruning.

Shrubs like dogwoods, snowberries and currants are easy to power shear into shapes because they’re fairly soft and they grow back very quickly. Almost too quickly. 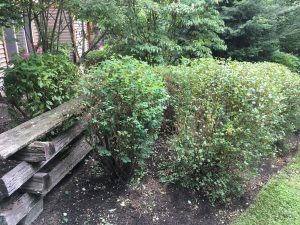 Left to right: Cornus, Symphoricarpos and Ribes, all are easy to power prune.

But what about rhododendrons? Can you really power shear rhodos like the other shrubs? I witnessed this recently and I don’t think it’s a good practice. I know, there is often very little time for mid-season pruning on large sites. It’s almost stressful to get everything under control and looking decent. But still, compared to the other shrubs rhodos are like the one-percenters. They give us a great show when they’re in bloom, they’re woodier and they deserve better treatment. I say spend the extra time on them. 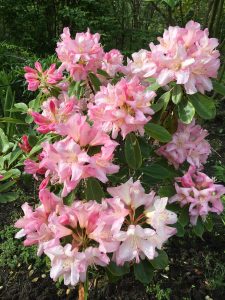 Not a bad show.

Also, unlike the shrubs mentioned above, they don’t grow as quickly. There is no need to rush rhodo pruning. I’m convinced that if you want a good-looking rhodo in your garden you must hand-prune it. Keep your power shears for softer shrubs.

Take a good look at the rhodo below. This is the finished product before clean-up and I can’t say I would recommend this approach to anyone. 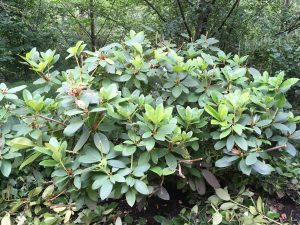 I hate the look of this because there are too many “sticks” and shredded woody branches poking out.

This specimen was power-sheared along with the other shrubs which I believe was a mistake. Note the shredded wood and branch ends poking out. It’s not pretty.

If you take a bit more time you can prune it properly. First, remove any dead wood. Then, check for any nasty crossing and rubbing branches. After that, remove any branches that are touching the ground.

If you’re worried about height then clip off the newest growth with your snips. And if you have even more time, hand pick the spent flowers carefully without damaging the new buds. By taking extra time for rhodo pruning you can shape it nicely without creating unsightly wood forks.