River rock is a great mulch material. I prefer soft mulches but river rock has its charms.

Last year I had a fairly easy task: remove a struggling skinny patch of lawn soaked in dog urine and install 2-6″ river rock. Sounds easy, right? I just went a bit far in my preparation work by removing too much soil. Then the bed ate up a lot of river rock and I went over budget. Both on time and material.

Of course, the one upside of using lots of river rock as mulch is that the bed is weed-free. Twelve months later I can laugh about it but I also learned from it.

Step one involves weeding and removing a little bit of soil so the rock can be nicely anchored. It wouldn’t make sense to install river rock over weeds.

In step two we install the river rock. Spread it out nicely so you get good coverage.

If you have a garden hose close by, wash off the sandy river rock so the colours show up. Unfortunately, there weren’t any water outlets nearby and I had to go work on another project. 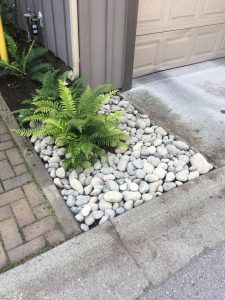 All done. We just have to hose off the rocks to reveal their colours.

River rock makes perfect sense here because cars access garages every day and they can run over the rocks. It’s harder with plants which get flattened; and bare soil just grows weeds. 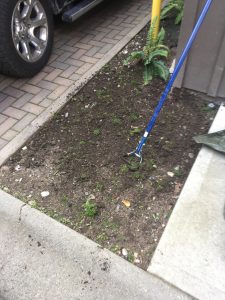 This is a maintenance nightmare. Bare soil just fills up with weeds and plants would just get run over by cars. Installing river rock is a perfect solution here.

I had to cover eight rectangles like the ones above with river rock and one yard was just right because I learned from my mistakes. Mistakes will happen from time to time. Learn from them and move on.