Never tolerate death in the landscape

We removed so much dead plant material, it loaded up our truck. That’s how bad it was; and how long overdue it was.

There are two special cases where removing dead plant material can’t be done. One is where the strata council decides against it for whatever reason. Since they’re the people paying you for your services, all you can do is suggest courses of action.

Two, the site plants may still be under warranty if the site is still new and the strata council hasn’t taken over the site from the developers. You might get to catalogue the dead specimens and hope the developers replant them. It’s usually a bitter fight so don’t make it worse by removing dead plant material. Just wait until everything gets resolved.

It’s not always possible to find out why some plants died but you should try. With our West Coast summers getting hotter some plants are doing worse than others. For example, Western Red Cedars are suffering. 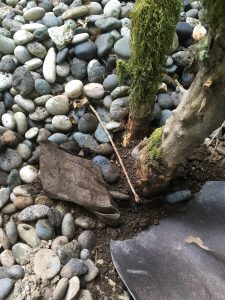 This Rhododendron was smothered by landscape fabric and river rock. Fabric plugs up and doesn’t allow water to penetrate to the root zone.

Assuming the plants didn’t die because of your poor maintenance, this is a great opportunity to sell the strata new plants. And that means putting together a quote with labour costs plus mark-up on every plant. In exchange the strata gets a better looking site. Looking at dead plants is depressing. 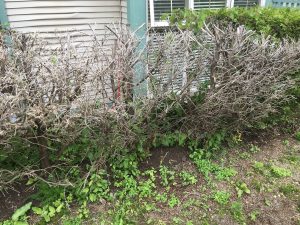 Obviously, it wouldn’t make sense to replace dead cedar hedges (Thuja occidentalis) with more cedars. We’re finding that Portuguese laurels (Prunus lusitanica) are doing much better in the landscape and form very nice hedges. You just have to make sure they get established well.

Trees should be treated the same way. Try a different tree species once you’re sure the tree is really dead. If you’re not sure, take your snips and gently scratch a branch. If it’s green underneath there is still life in it; if it’s brown, it’s toast and you should replace it. 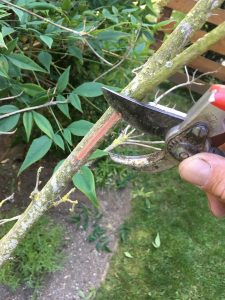 This Cornus tree failed the wiggle test but just to make sure, I scratched the branch. Brown means it’s toast so I pulled it out easily.

Dead plants look awful in the landscape. We want healthy, beautiful landscapes for people to live in. Try to remove and replace dead plants as soon as you can get approval from your clients.