Summer dangers in the landscape

There I was raking out a bed and to get under a rhododendron I had to bend down and use my hands. Seconds later my left thumb was in excruciating pain. Then I quickly clued in: my hand had just passed over a ground nest full of wasps. So I hosed off  my thumb for several minutes, finished the day and left for home in a foul mood. My left hand was swelling up with every passing hour.

There are many dangers facing landscapers in the field and in summer, insects are danger number one. Still, this was my only sting all season. And as long as I can do my job, I ignore all wasps. It’s usually the residents that panic.

One week later I ran into a tree nest full of wasps which is much easier to detect when the wasps are flying in and out. And I was ready, too! I had my spray can ready so I gave it a nice shake and aimed it at the opening. Out came a lot of white foam. 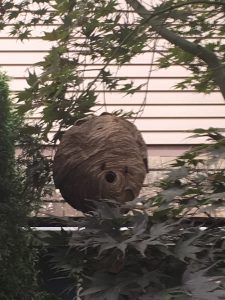 This is much easier to spot than…. 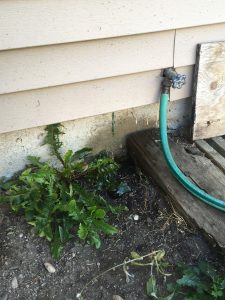 Here is the key point of this blog post: when you buy a spray can for wasps and hornets, buy the gluey stream type not foam.

The foam coated the opening and the entire part of the nest facing me. Some wasps even escaped from the opening. Two weeks later I found live wasps still inside the nest. This doesn’t happen with the glue type spray can. The toxic glue comes out in a steady stream and plugs up the nest opening. Case closed.

Hint: use goggles and pray that the wind is blowing away from you.

I waited for two weeks before removing the nest. When I examined it, I found two wasps still alive inside. Hours later the pest control technician found some nest leftovers and questioned me about it. Most likely I had just prevented him from generating a fat invoice. Safety first!

Late summer wasp problems are common in landscaping so be careful. And if you buy a spray can to control the insects, do NOT buy the foam version. 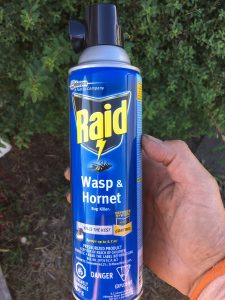 Buy this type of spray, NOT foam.