Companies don’t need costly, formal wellness plans for their employees. It can be done informally. One good example is a trail race from November 2018. The company boss ran his first trail race with one of our fastest foremen. It was a gruelling off-road half marathon and also in the field were the famous- now retired- Vancouver Canucks Sedin twins. 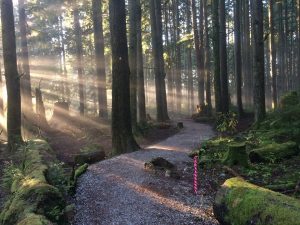 Not a bad race course!

The boss generously sponsored six other employees in the short 12.5 km course race. And the game was on because I was the oldest in the group and they were all gunning for their supervisor. Fools.

The North Shore morning sun was extremely pleasant but it was still cool in the shade. I was careful not to over-dress and I was the only runner in our group to warm-up. Remember, you should get to the starting line sweaty.

One of the runners in our group, let’s give him a fake name like Stan, took off fast but we stayed close to him. Once he started walking in the first 3km, I knew I’d take him; and I did. Stan would later pollute the forest trails with his vomit. Four times!

I felt surprisingly well, well enough to notice the morning mist spilling out of the forest and on to the open trail. It was an amazing effect, as if the forest was breathing.

Once I passed Stan, nobody would come close to me and I crossed the finish line two full minutes ahead of one foreman. He considered it a success but I noted to myself that I’m old enough to be his father. The others finished well behind me but they finished!

We took a team photo before I had to run off. Later at home I checked the results and I was ecstatic with my number one placing in age category. I still got it, I thought, but then I scrolled up and noticed that my boss had entered me in the 60-69 age group. Very funny. 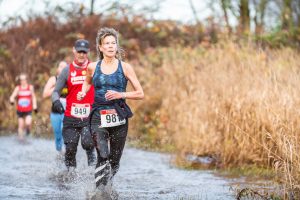 Landscape pro Vas (949) competing in the Gunner Shaw XC on December 1, 2018. This time I was sponsored by my Phoenix running club.

With a small investment my boss got seven employees to run a trail race in the woods on a sunny November morning. All of us finished and there was some team bonding happening. The boss even took them out for lunch.

Next is the 2019 Sun Run, Canada’s largest 10 km race, which we will enter as a team in the corporate division. I think we’ll do fine.

All companies can design informal wellness plans for their employees. It’s good for the company and for the workers.