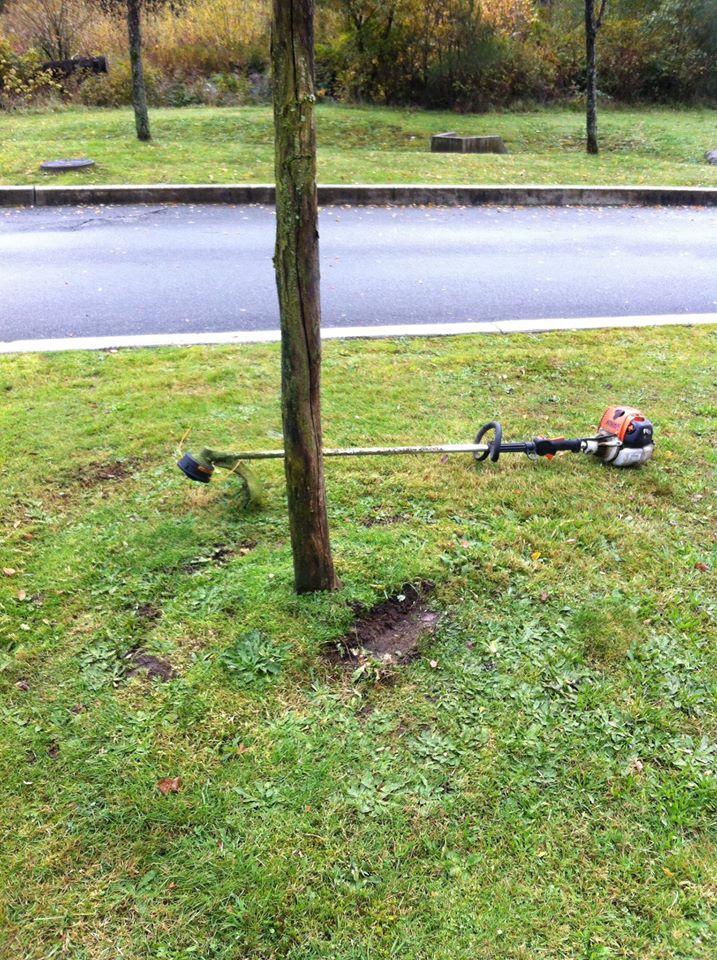 A heavy ride-on Deere mower has gone over the area very efficiently, riding right over the root zone. That means less line trimming. Perfect for the municipal workers maintaining this park. The operator does this every ten days or so. But wait. What about the tree itself? The tire tracks point to a deadly condition: soil compaction! (The pictured tree is dead. Was it soil compaction that killed it? Or bored ball players from nearby baseball diamonds? Campers building illegal fires with poached tree branches? Line trimmer damage?)

The 4th edition of Arboriculture defines compaction as the breakdown of soil aggregates. Compaction decreases total pore space in the soil. When large pore spaces are compressed, the resistance to root penetration increases.

The results of compaction?

Basically, with compaction the tree struggles to obtain water and oxygen, roots can not grow as easily and since water can’t penetrate it runs off, causing erosion on the surface.

The top 4 inches of soil are usually the most affected; the greatest compaction occurs about 0.75 inches below surface.

At the September 2015 Can-West Horticulture Show in Abbotsford, Dr. Kim Coder relayed to us a story about a group of green activists who campaigned to save an ancient tree. They assembled at the base and did what they had to do, never noticing the serious compaction they were responsible for over the root zone. If I recall the story correctly, the tree declined and eventually died.

Think about soil compaction and avoid it! It’s hard work rehabilitating compacted soils. For best results create a nice tree well and mulch it with arbor chips. Many tree companies are happy to donate their wood chips. Problem solved.