Another shocking waste of time

New landscape foremen gain experience as they work in the field with their crews and you can expect them to surprise you. I often think I’ve seen it all, but it’s not true; I will never run out of blog topics.

Consider my recent visit to one work site. The foreman and his helper were behind on mid-season pruning and finesse work. Really behind so I was called in to help out. That’s my role as landscape supervisor. I help out and train workers as we go.

After finishing line edging, I found both workers by the truck washing and polishing their line edger heads!? Completely shocked and annoyed, I asked them why we were polishing machine attachments at ten o’clock when there was tons of pruning and weeding to do. “That’s how I like it” was the foreman’s reply. 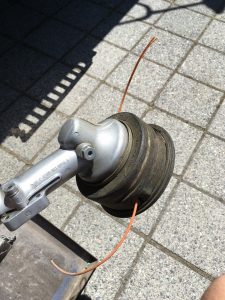 A nicely polished head but what’s the use when your site is burning?

Luckily, I kept calm and left to resume pruning. But this sort of time wasting shows the crew’s inexperience. They wash and polish attachments that will get dirty again the next day instead of doing important work. Logistics can be done at the end of the day before the crew leaves the site. Ten o’clock in the morning is prime time for pruning and weeding.

The crew’s inability to see their time wasting and lack of focus is extremely shocking. Having extra people on site should have been a good hint. But no, they polish their attachments after every use and chat while their sites burn. The front entrance area was full of large weeds and it could have been cleaned up in the time it took to polish two attachments.

So, what is a landscape supervisor to do? Well, first I write a blog post about it to educate others about time wasting in landscape maintenance. Second, I went online to have some fun. I posted a question on several lawn care Facebook groups, asking their members how many of them washed their line edger heads after every use.

Because the Facebook groups are populated by professional lawn care dudes who run their own shows they laughed hard. Not a single individual washed his attachments after every use. That’s because most of them run businesses; they don’t work by the hour for bosses. They hustle all day so they don’t have time to waste.

Following the latest feedback research, I informed the crew what I would do. I would focus on the site by taking care of mid-season pruning and finesse work. Then, if I still worried about the condition of my attachments, I would polish them after loading up the truck at the end of the day. Maybe. In practice, I never polish my attachments. I lubricate them periodically; and I replace worn out parts.